DISH Chews Up and Spits Out Local Workers 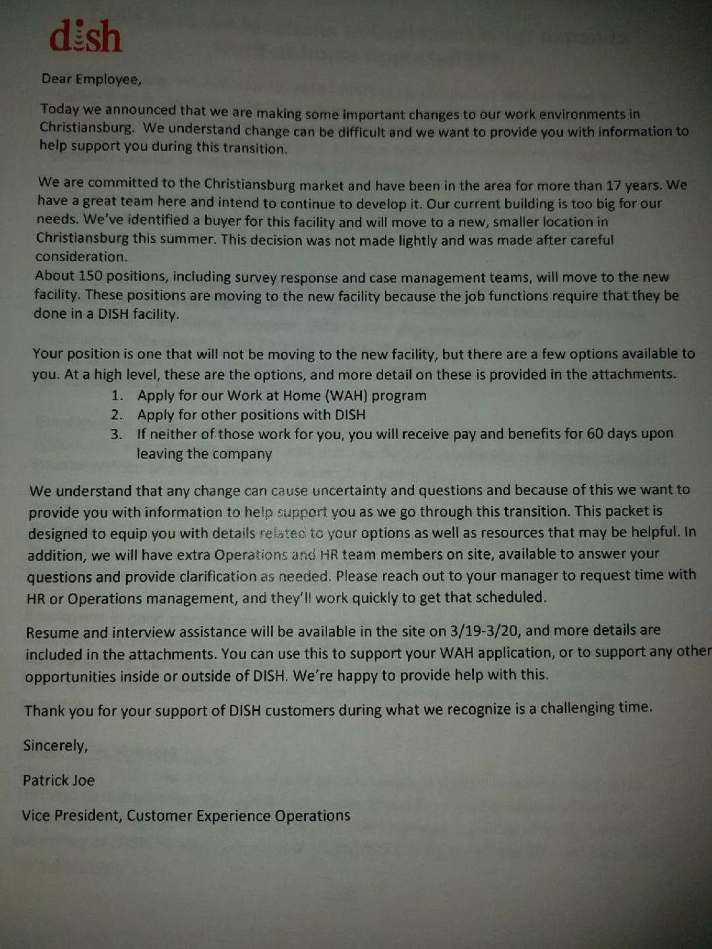 This past Tuesday DISH announced plans for a mass layoff which will downsize to 150 workers from originally 600 workers. This is devastating for hundreds of local workers and their families who now are scrambling to find new sources of income in the local job market where part-time and sub-par wages are the norm.

Since this announcement many DISH workers have contacted us to share their experiences of working at DISH as well as the lies and manipulation DISH bosses have engaged in leading up to their announcement of mass layoffs. They did this all for the sake of making these mass firings as easy and consequent-free as possible for the bosses.

We are calling on all local DISH workers, both current and former, to take a collective stand against these mass layoffs and join us as we work to fight back against this attack on the local working class. You can rest assured that DISH CEO W. Erik Carlson won’t be asked to sacrifice his annual salary of $3.8 million for the sake of the company. It is only the workers who are being forced to suffer the brunt of these profit-driven calculations made by the executives.

DISH workers have the legal right to strike whether they are in a union or not, we would encourage workers to utilize what rights they have and fight back. We want to fight with DISH workers against the DISH bosses and their cold-hearted actions that harms the working class throughout the New River Valley. We cannot tolerate corporations coming into our community and treat workers as expendable things.

If corporations want to make profit off our backs in our community they must meet the needs of working families by providing sufficient pay and benefits which cover all costs of living including healthcare, housing, transportation, education, and recreation. Workers deserve nothing less. We cannot allow local working families to accept the norm of poverty wages, no benefits, inadequate or no healthcare, precarious living arrangements and boss intimidation on the job.

Below is a selection of DISH worker testimonies speaking to these problems. Stay tuned for more developments.

“I was part of the layoff at Dish Network in Christiansburg. We went to a meeting on 3/13/18 expecting to be told where the new building is and when it would open up and how we would go about moving. Since news came out that out site was shutting down, we were reassured that we wouldn’t be losing our jobs.

For three months we heard this and as soon as the meeting came around we found that the promises made were just lies to keep us working. I went in the next day a few hours early to place a box at my desk in the off chance they would fire me because of attendance and some points not being covered by my ADA accommodation yet. I walked back to HR just to discuss my options and see how much the severance pay would be since I could not accept the Work from Home position. Again, I simply wanted to know how to go about accepting it when I decided I wanted to leave and how much I would receive and for how long. First, I want to point out that when hired, Dish promised me a consistent work schedule that I got to pick. Well, I got to tell them what days and times I was available, but I wasn’t guaranteed the 30+ hours I requested each week being part time.

So when I asked HR how much I was going to receive until May, they told me they had no idea, but they may just average the checks I received in the past 6 months I was working for them. Not wanting to risk losing the option for this I took it, but after I accepted it I was told that my coach would be getting my belongings and I was going to be walked out the back of the building and I was not to return to the premises. I was willing to work at least one more day and you would think they’d be fine with that since they went on a mass firing spree the day after the meeting.

Dish lies to us and tired to make it seem like they weren’t laying us off, but giving us the option to stay with them or to just leave. This is by far one of the worst companies I have ever worked for. I was only there 6 months and my life was miserable. They don’t pay you enough to put up with some of the people we had to deal with. If the public is reading this, please treat your customer service reps and tech reps with respect, we’re only reading stuff off our screen that our company forces us to say. If we could give you free stuff, we would. And just because you can’t see our face doesn’t mean you can cuss us out or be rude and disrespectful. We look you up on the internet and judge you.

And if you have Dish services, disconnect and go with someone else. Trust me, you’d be saving so much money.”

“I’m an employee at the Dish Christiansburg, VA site and just found out a lot of us are being fired and not being given the chance to do work from home. They’re asking us to fill out a resignation form as an immoral attempt at not having to pay us unemployment or severance pay. I am very disappointed in the company and I intend to collect every penny that’s due to me for being let go.”

“I use to work for Dish Network and with everything going on with the company right now, I figured some things ought to come out about my treatment with the company. I was employed from January 2015-September 2016. One of the major issues I had was with my attendance, I suffer from Rheumatoid Arthritis, it was not know at the time when I was employed there but I was given FMLA time to use on days when I was having more trouble.

One of the managers got a hold of me and said she was suspicious of my days of FMLA and she was opening an investigation into my use of them and to see if I still needed them, and if she found they I abused the days then I would be fired and my last paycheck garnished. Another time was about seven months before I left, I was put off of work by my doctor because I have strep throat and I couldn’t talk, I had documentation from the doctor stating for me not to work. I come back into work and I was made to sign a written disciplinary form even though I had a doctor’s note stating me not to work, they told me they did not care about doctor notes.

The reason I left was because I had started college again and was going to finish my general studies degree and start pharmacy classes as well. Well since this did not meet their “appropriate” degrees, I was told they would not work with my schedule and if I missed any of the days that I needed off to make it to class that I would be fired. Everyday that I worked there I always felt my job was in jeopardy, the employees are expendable and could have been easily replaced. Dish does not take care of it’s employees, I’ve seen people taken out in ambulances because they get so upset or sick from the stress. I did hear about two people suffering serious situations, one man had a heart attack and a woman went into early labor. That should tell you how bad the situations were there.”

“I was an employee of DISH Network from 7/10/17 – 3/14/18. I moved to the NRV from Richmond, and was excited to have to opportunity to work at DISH. Coming in, we were given so many great stories of employees who worked their way up the ladder to higher positions and they all expressed how much growth and opportunity there was through the company.

A few months back, we had some employees come in from corporate to educate us about moving to a new, smaller site and expanding work at home opportunities. As I live an hour away from the site I though work at home would be a great opportunity for me, save myself money on gas along with wear and tear on my car. On Tuesday March 13th we were all scheduled for a very brief meeting to educate everyone on the new, smaller site. They said they were going to be moving to a new location and taking 150 employees to this new location, and only those of certain skill sets. They also said if we are outside of those skill sets, they will be accepting applications for work at home positions with a cut off date of 3/16.

Coming in to work this morning 3/14, I was called into a room with a manger and let go with the reasoning of “not being fit to move on with the company.” This came as a shock, as I was anticipating to remain at the location for at least two months while trying to find a new job. As well, within the 45 minutes of me showing up and leaving this day I couldn’t help but notice the parking lot dwindle down. As an 8 month employee, I was devastated. I can’t begin to imagine how the employees of 17 years are feeling.”

“Dish is a joke. They lie to their employees. When I worked there, I had doctors notes stating I could not work between certain hours due to pregnancy complications. They would not work with the doctors notes but told me I would keep all benefits while on my working 4 hours of my split 8 hour shifts.

When I went on maternity leave a month prior to giving birth, they informed me that I did not have benefits because I was only working part time. They blatantly lied to me about keeping my benefits and so when I went out for leave they fired me on the spot. I couldn’t even pick up my last check. They refused entrance to the building and mailed my check one month after I was supposed to get it.”

7 thoughts on “DISH Chews Up and Spits Out Local Workers”